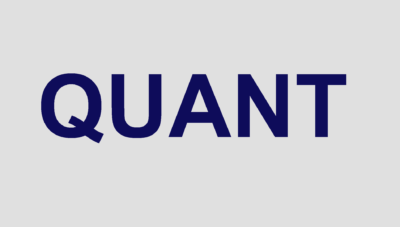 What is Quant and how did it establish its ground as one of the best performing crypto currencies of this month?

Quant Network is one of the very few eco systems that is designed to address problems regarding interoperability amongst blockchains without the usage of any complicated softwares. Quant is a project that operates via such advanced technology by giving both individuals and financial institutions an equal opportunity to make the best use of their blockchain. Now, the reason behind their blockchain’s success in revolutionizing the fields of  healthcare, supply chain and financial services is the adoption of over ledger technology in their network.

In recent events, Quant crypto’s price was shooting through the roof regardless of the fact that the rest of the altcoins are struggling to enforce recovery. Indeed, the launch of overledger 2.0.1 catalysed the price of this crypto asset to smash its previous ATH.

The daily technical chart of Quant highlights the fact that the token has been notoriously de-coupling against Bitcoin as evidenced by the enormous green candlesticks on days BTC’s price practically collapsed.

The Quant token kickstarted the month of June by breaking out from the range bound territory that was responsible for capturing the token’s momentum since the beginning of this year. The breakout was followed by a huge spike in the price, giving investors the chance to nearly double their amount in a matter of six days.

Ultimately, the price of QNT started exhibiting exhaustion after hitting the milestone of $84 on June 17th. An upward trajectory is only plausible under the condition that the weekly candlestick closes above May’s high which lies in the range of $64.

While the current price is only available at a discount of 10% since its ATH, the overextended relationship between the price action and the critical EMAs suggest a pullback. This could lead to QNT crypto exploring the support of $57 which is bolstered by the 20 EMA. The above statement can be held accountable by the daily Stochastic RSI flattening towards the apex to transpire a bearish cross.

Yesterday’s volume of (14.80K) is considerably higher than the 20 period moving average which was hovering in the range of (12.23 K) The presence of sufficient buyers demonstrates strength in momentum as a consequence of the latest update. The continuation of above average buying pressure could stimulate the price of QNT to tackle the overhead resistance of $78 in the near term.

According to the Coinmarketcap Website, the Quant crypto has achieved the #80 rank and a Market Dominance of 0.6%.

The 4-hour chart of QNT adds light to the fact that the token is still in the race to explode. The price action has recently broken out of the bullish flag and is attempting to breach the overhead resistance of $78.

On the flip side, barring a tense sell off, Quant needs to steer clear of the golden ratio of 0.618 FIB, which is placed at $64. A violation of this support level will provide confidence to the bears who will make rigorous efforts to sink the price even more.

The Relative Strength Index (neutral)  has limited itself to 54 after stepping foot inside the overbought territory. In addition to the index dictating a no trend scenario, its collaboration with the price action hints the possibility of bullish divergence. The Moving Average Convergence Divergence (slightly bullish) is in favor of a bullish trend as displayed by the decelerating histogram during press time.